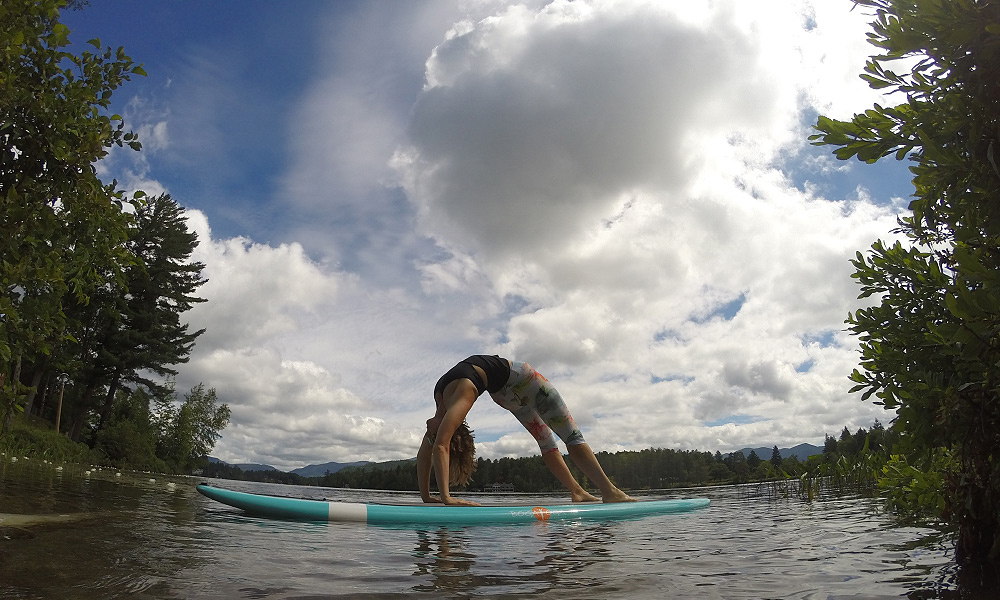 Taking Your Practice onto the Water

BOGA Yoga is for everybody!

Taking your practice afloat will likely be the highlight of your summer.  It’s no secret that I am slightly obsessed with SUP yoga, and I tell everyone to give it a try.  It’s a misconception that SUP yoga is an advanced form of practice.  Just like regular yoga, SUP yoga will meet you where you’re at.  So many of my students drag a loved one along to practice.  The funny thing is that after class the student who was “forced” to come always tells me how much they enjoyed the experience.  I’ve had people bring out their grandparents who have never done yoga, and they still had a great time.  If you can sit down on your board and breathe than you can do SUP yoga.

With that said, there are mental and physical differences between SUP yoga and land yoga.

Here are my eight key differences:

1) There is definitely an increased level of fear when approaching SUP yoga for the first time.  Due to the fact that I teach in a tourist town, most of my students have never done SUP yoga before.  Many have also never stepped on a paddle board before. They often show up for class excited and nervous.  I don’t think I have ever taught a class where I didn’t hear multiple students say something such as “I’ll totally be the one who falls in.”  The truth: most students are afraid of falling into the water.  Even if they say they aren’t afraid.  Even if the water is warm.  Even if it’s sunny and hot.  Even if they love swimming.  Most of the time students don’t fall in, but when they do, they tend to have a much better class.  They immediately learn that it’s no big deal, and are now more apt to get out of their comfort zone and play.

2) One of the benefits that I see from a consistent SUP yoga practice is increased attention and concentration.  There’s no research that I know of to support this claim, but I believe that SUP yoga is even better for your mind than regular yoga. Do you ever catch yourself thinking about all sorts of crazy stuff when you’re practicing on land?  That tends to go out the window on the water.  You have to concentrate harder throughout the entire class.  There’s no tuning out through your Warrior poses.  With time, this builds up your “concentration muscle.”

3) SUP yoga slows you down more than regular yoga (aka makes you more mindful of your movement).  It forces you to move with control and focus.  This is really great for those of us who have a tendency to rush through their practice.  Each moment between the full expression of a pose is just as important.  On land you can be naughty.  On the water, if you’re naughty you will likely fall in!

4) If you asked me a couple years ago which postures are not possible on a board I may have had a list for you; however, I have seen people do things on a SUP board that defy the laws of physics.  With that said, the majority of us will have a slightly modified practice on our boards, especially when you are a newbie.  The more points of contact you have with your board the easier it will be to balance.  Postures that you’ve never considered difficult may feel challenging on the water.  For example, tree pose is very challenging on a board because you only have one point of contact.

5)  Some postures are better modified on the water.  I recommend that students keep their feet hip width when standing.  Students may also want to initially widen their stance during Warrior poses to help them balance.  It’s also helpful for some students to modify by doing the Warrior poses from a kneeling position rather than standing. It’s best to take the time to set up your footing, your foundation, before rising to standing.

6) You will find that SUP yoga strengthens you in a way that is different than land yoga.  On the water you will work muscles you didn’t know you had (like little ones in your feet and ankles).  Your core will also be engaged throughout the entire class to keep you balanced and stable.

7) Being outside is ridiculously good for you. While practicing SUP yoga it’s almost unavoidable to soak up the beauty around you, and draw inspiration from your natural surroundings.  Breathing in fresh air, and soaking up sunshine is another plus.  You also avoid the dreaded “I really want to do yoga, but it’s too nice to be inside a studio” dilemma!

8) SUP yoga is just more fun.  Don’t get me wrong, I LOVE being on my mat as well, but nothing compares to the enjoyment of being out on the water on a beautiful day. SUP yoga encourages creativity by getting you out of your normal routine.  Before you know it you’ll be thinking, “hmmm I wonder if I could try this…” You’ll also find that SUP yoga doubles as play time, something most of us adults don’t nearly get enough of!

Have you gotten your BOGA Yoga on this summer?  What differences have you noticed while practicing on the water?